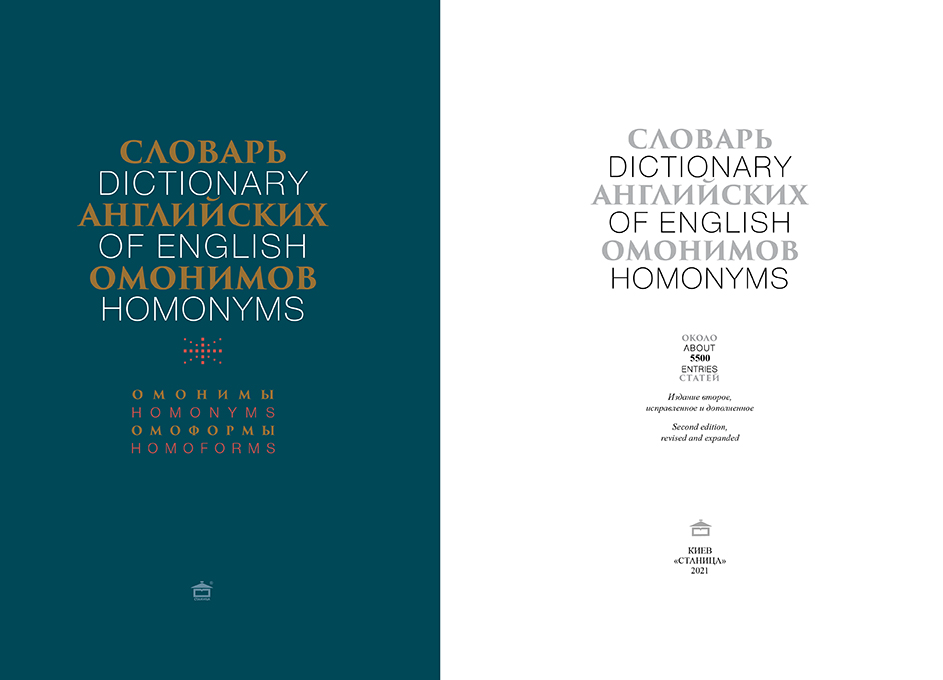 We are thrilled to present the second edition of the Dictionary of English Homonyms.

The Dictionary is intended not only for specialists, but also for anyone who studies English or uses it in their work, as well as for native English speakers who study Russian.

Homonymy, or the relationship between homonymous words, has long attracted the attention.

Homonyms (from the Greek homos — “the same” and onyma — “the name”), in the broadest sense of the term, are words which coincide in form but differ in content.

Within homonymy are customary distinguished the following types of homonyms:

p e r f e c t  homonyms are words of the same part of speech, which coincide in sound and in written and grammatical form, but differ in meaning, for example: ear — organ of hearing and ear — sead-bearing part of cereals.

h o m o p h o n e s  are words which match in sound but differ in their spelling and meaning, for example: right, rite, wright and write.

h o m o g r a p h s  are words which coincide in spelling, but differ in their sound and meaning, for example: tear [tIə] and tear [tɛə].

l e x i c o-g r a m m a t i c a l  homonyms are words of different parts of speech which are identical in sound and not related in their meaning, i.e., they coincide in spelling and/or phonetic form but differ lexically and grammatically, for example: rose — noun and rose past of rise — verb.

p a r o n y m s  are words similar in sound, spelling and morphemic composition but different in their meaning, for example: villain — criminal and villein — serf.

Paronyms should not be confused with so-called embarrassing pairs, which being similar in sound and even partially in their graphic form, are connected with each other only structurally, for example: I scream — ice-cream; gray tape — great ape; my turn — might earn.

The dictionary thoroughly discusses interesting topics such as the various sources of the homonyms and the different ways they emerged as well as the quantitative characteristics of the phenomenon.

Finally, the Dictionary of English Homonyms can be used not only as a reference edition, but also, to some extent, as a traditional bilingual translation manual.

Buy the electronic book "Dictionary of English Homonyms" in our store